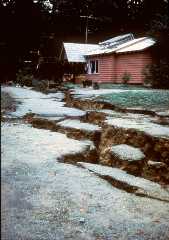 This is a portion of the Loma Pietra earthquke fault near Santa Cruz, Calif.
Click on image for full size
Image courtesy of the American Geophysical Union

Faulting is part of the process which causes volcanism and continental drift. As the Earth's crust is stretched or shoved during the seafloor spreading process, the rocky material of which it is made will fracture. These fractures are called "faults". The different patterns of faulting provide evidence of the stress and strain, or the pushing and shoving the crust is undergoing.