Redoubt Volcano, Alaska (USA) during a continuous, low-level eruption of steam and ash on December 18, 1989.
Courtesy of USGS

Ash is made of millions of tiny fragments of rock and glass formed during a volcanic eruption. Volcanic ash particles are less than 2 mm in size and can be much smaller.

Volcanic ash forms in several ways during eruptions. Sometimes gas is released from the underground magma chamber which shatters rock into the tiny pieces that make up ash. Sometimes, newly-formed volcanic rock shatters into ash when it comes into contact with water or ice and cools quickly.

Falling ash can sometimes cause more damage than flowing lava because ash can be carried great distances through the atmosphere. Volcanoes have a cooling effect on weather because the ash remains in the sky and reduces the amount of sunlight reaching the surface. Ash however, also carries important nutrients to the soil on which it finally lands, such as nitrates, and sulfates. 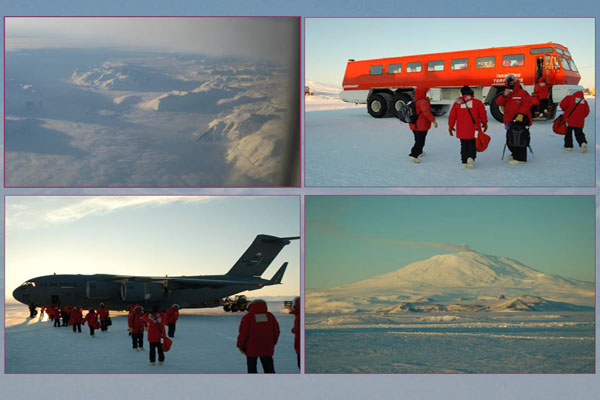 About an hour before we were scheduled to land, we started descending and the weather was clear. We next spotted the snow-and-ice covered Transantarctic Mountains (TAM), and our spirits lifted: we were...more

Glaciovolcanoes, they're called, these rumbling mountains where the orange-red fire of magma meets the frozen blue of glaciers. Iceland's Eyjafjallajökull volcano, which erupted recently, is but one of...more