Sometimes a picture is worth a thousand words. This image shows the correlation between rising levels of carbon dioxide (CO2) in the atmosphere at Mauna Loa with rising CO2 levels in the nearby ocean at Station Aloha. As more CO2 accumulates in the ocean, the pH of the ocean decreases. 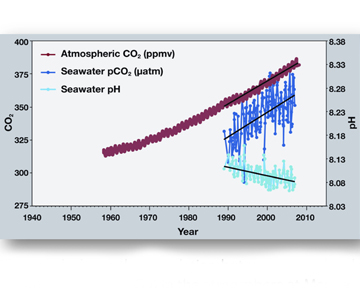 Another helpful image is the following comparative graph set. The top graph shows the variation of CO2 in the Earth's atmosphere over the last 400,000 years. You can see the blue line goes up and down with natural variations in levels of CO2 until just before Present where CO2 levels spike drastically upwards due to human contribution of the gas. Projected levels of CO2 are shown for 2100. On the bottom graph, the ocean's pH is shown. You can see that this inversely varies with the atmospheric CO2. You can see natural variations of the ocean's pH until just before Present, where the pH plummets from natural levels. Projected pH level is around 7.8 in 2100, much lower (more acidic) that the ocean is now. 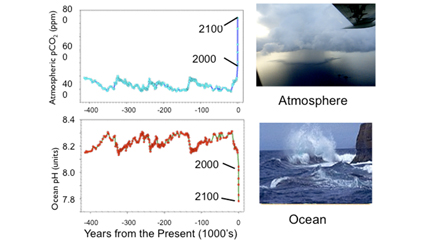 There is a scientific consensus to the fact that the global climate is warming because of the addition of heat-trapping greenhouse gases which are increasing dramatically in the atmosphere as a result...more