We began our exploration of urban heat islands (UHIs) by exploring how the world’s population is increasing, as well as how the percentage of urban dwellers has increased. As of 2008, more than half of the planet’s people live in urban areas. This percentage is forecast to swell dramatically in the developing countries over the next few decades. As long as we continue to live in cites, we will experience UHIs and their effects. We then explored perhaps the most obvious effect of urbanization: air pollution. In the 18th century, the Industrial Revolution and increased urbanization combined to vastly increase anthropogenic pollutants in the atmosphere. We’ve also examined how UHIs alter precipitation patterns locally and regionally. Now we’ll close the loop by taking a brief look at other UHI effects and mitigation efforts. 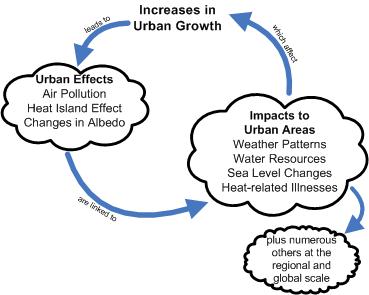 Urban loop in the climate system

Changes to local weather
Aside from the obvious effect on temperature, UHIs can produce secondary effects on local meteorology, including the altering of local wind patterns, the development of clouds and fog, the humidity, and the rates of precipitation. Here is a partial listing of local UHI effects for a typical mid-latitude city of about 1,000,000 inhabitants (compiled in 1997 by T. R. Oke):

Health issues
Heavily-urbanized Europe suffered one of the worst heat waves in recorded history in 2003. According to the IPCC, it was likely linked to anthropogenic climate change. In less than two months, approximately 35,000 people died of heat-related ailments. In addition to the heat, other factors, such as ozone and air pollutants from fires spawned by the heat, also compromised people’s health. Climate change-related health impacts will be the subject of an in-depth case study next week.

Sea level change
This week’s material on regional impacts includes information about sea level changes, one of the most widely publicized effects of climate change. It is not currently thought that UHIs affect global sea levels, but changes in sea level will certainly affect many urban areas. Such impacts may include:

It’s worth remembering that only about 2% of the world’s land area is in coastal regions less than 10 meters above sea level and yet contain more than 10% of the global population.

Changes in water availability and quality
All people need clean water to survive. Along with the ever-increasing human population, there will be increasing demands on freshwater supplies in the future. IPCC predictions indicate that some regions may receive more precipitation (perhaps causing flooding and compromised water treatment systems), while others may receive less (resulting in a scarcity of water). In addition to water for drinking, sanitation, and public safety (firefighting, for example), increasing populations require more and more food. All forms of agriculture and food production require fresh water, which in turn puts more pressure on freshwater sources. Changes in rainfall, water availability, and water quality occurring because of climate change can lead to changes in the risk of both water-borne and water-washed diseases. This subject will also be covered in more detail next week.

Relation to global warming
Climate change skeptics often state that UHIs are responsible for observed heating, and that the effects of urban sprawl might be misinterpreted as an increase in global temperature because some parts of some cities may be several degrees hotter than their surroundings. While the UHI warming is an important local effect, there is no evidence that it biases trends in the global historical temperature record.

The Fourth Assessment Report from the IPCC (2007: p.244) stated: “Studies that have looked at hemispheric and global scales conclude that any urban-related trend is an order of magnitude smaller than decadal and longer time-scale trends evident in the series. This result could partly be attributed to the omission from the gridded data set of a small number of sites (<1%) with clear urban-related warming trends. In a worldwide set of about 270 stations, Parker (2004, 2006) noted that warming trends in night minimum temperatures over the period 1950 to 2000 were not enhanced on calm nights, which would be the time most likely to be affected by urban warming. Thus, the global land warming trend discussed is very unlikely to be influenced significantly by increasing urbanization. ... Accordingly, this assessment adds the same level of urban warming uncertainty as in the TAR: 0.006°C per decade since 1900 for land, and 0.002°C per decade since 1900 for blended land with ocean, as ocean UHI is zero.”

Mitigation: what can we do?
According to the EPA, there are a number of steps that communities can take to lessen the impacts of heat islands. These include:

The extent to which urban areas can benefit from heat island reduction strategies depends on several factors. Some of these factors, like prevailing weather patterns, geography, and pollution transported from up-wind regions, are largely beyond the influence of local policy. Other factors, such as land-use patterns, road and building materials, and the planting of trees & vegetation can be directly affected by decision makers. NASA researcher Stuart Gaffin stated "…vegetation is a powerful cooling mechanism. It appears to be the most effective tool to reduce surface temperatures. Another effective approach is a man-made approach to cooling by making very bright, high albedo, or reflected light, on roof tops. These light-colored surfaces, best made using white coatings, reflect the sun's light and thereby, its heat. Interestingly, more area is available to create the lighter surfaces than to add vegetation in a city such as New York." The city of New York determined that largest cooling potential per area was highest for adding trees along city streets, followed by living roofs, light covered surfaces, and open space planting. From the standpoint of economics, light-colored surfaces and roofs, along with curbside planting, are the most cost-effective ways to achieve temperature reduction.

Pluses and minuses
While it may seem that all the effects of UHIs have a negative impact, there may be unexpected pluses among all the minuses. For example, consider urban energy consumption. Although the major effect of urban heating is increased requirements for cooling (especially in low and middle latitudes), it is conceivable that cooler high-latitude cities, such as Helsinki, would presumably expend slightly less energy during the winter for heating. Water resources might also have their pluses—increased precipitation in previously dry regions might allow increased agriculture downwind.