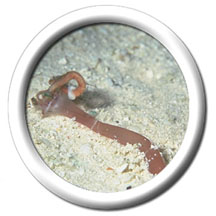 There are two very distinct phyla of worms. The Platyhelminthes phylum is more commonly called flatworms, while the Annelida phylum is also called the Segmented Worms. The differences are found in the names; flatworms are flat, and segmented worms are made of segments!

Flatworms are very colorful, but also very difficult to see because they hide during the day. Flatworms look like elongated pancakes! They feast on ascidians and the occasional invertebrate. Flatworms are no longer than a few inches, but they make up for their size with beauty. Kent's Flatworm is a brilliant red with a white stripe down the middle and speckles of white all around.

Segmented worms are not flat, but look just like your ordinary worm that you find on the sidewalk after a rain. Some of them have tiny hairs that are used for swimming and protection. Some are less than an inch long, while others can grow close to a foot! They aren't pretty like flatworms, and many may say they are just plain ugly, with the exception of the fan worms. These special creatures look like butterflies in the water. Even so, you probably wouldn't want one for a pet!