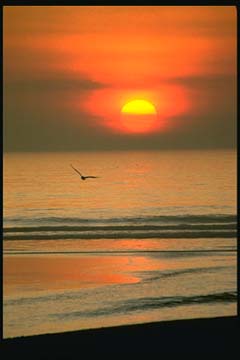 How did it all begin? Perhaps the most intriguing question we, as human beings, could ever contemplate is that of our own origin.

At least three classes of hypotheses exist attempting to explain the origin of life on Earth. The first, and oldest of these suggest that life was created by a supreme being or spiritual force. These ideas and explanations have been passed down from generation to generation and vary considerably among different cultures and religions. Because theories about creation can neither be proved nor disproved, they lie outside the realm of science and will not be pursued further in these pages. We leave it to each individual to decide for him- or herself.

The second set of hypotheses suggest that life began elsewhere in the universe and "arrived" on Earth by chance, such as with the crash of a comet or meteor.

The third, and most widely held hypothesis in the scientific community, is that life on Earth arose approximately 3.5 - 4 billion years ago as the result of a very specific sequence of random chemical events. This theory suggests that the early environment of Earth may have provided the appropriate conditions for the spontaneous formation of organic molecules--the building blocks of life. In the early 1950's two biochemists, Stanley Miller and Harold Urey, conducted an experiment which demonstrated the spontaneous formation of amino acids from inorganic precursors in the lab. It is assumed that over time, the early organic molecules interacted, eventually leading to the evolution of the first life forms.