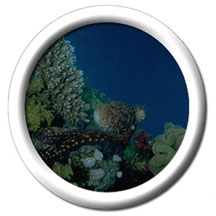 A variety of animals, including snails, octopi and squid, are called molluscs. Over 90,000 species of molluscs are called gastropods. The beautiful shells you see when walking along the beach are probably from one of these animals. They are rather simple creatures, feasting on sponges or other small animals. Some live near reefs, while others prefer the mud or even sandy shores.

Oysters, scallops and clams are called bivalves because they have two shell halves. Bivalves enjoy tiny organisms like plankton and sometimes algae. They aren't as pretty as the gastropods, but they make a much better dinner!

Finally, there are the cephalopods, probably the most famous molluscs and the most intelligent. Squids and octopi are the most common the largest ones. Some giant squids can reach lengths of 50 feet! These larger animals, like the octopus in the image, eat fish, crustaceans and other molluscs.

Crabs aren't the only crustaceans in the sea! Barnacles are small, rounded animals generally found on rocky reefs or shores. They are also seen attached to boats. Barnacles have a hard shell, and use...more

People do not often see giant squid, which live in the deep ocean. In fact, less than 50 giant squid have ever been seen. So when a giant squid was found dead on a beach in Australia last week, it was...more

The most widely known echinoderm is the sea star, or starfish. But sea urchins, sea lilies and brittle stars are also echinoderms. Sea lilies and feather stars are two types of echinoderm. These delicate...more

An eel is a long, thin creature that looks like a snake in the ocean! Eels range from a few inches to 6 feet in length. Many are very colorful and sometimes scary! Most eels live near corals where there...more

Seals are carnivorous animals that live partly in the ocean and partly on land. Most seals come on land to mate and to shed their hair. But, seals can live up to 90% of their life in the water. So, they...more

One of the reasons there are so many divers is the number of strange animals there are to observe. There are thousands of species of fish in the sea, and several of them are unique. The Tasmanian Blenny...more