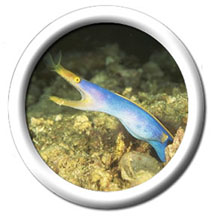 An eel is a long, thin creature that looks like a snake in the ocean! Eels range from a few inches to 6 feet in length. Many are very colorful and sometimes scary! Most eels live near corals where there are plenty of fish for food.

Some eels, can be hand fed by some divers. But this can be very dangerous, because the eels can't tell the difference between the diver's hand and the fish they are providing! Fish lovers should also be aware that most eels are poisonous, and should not be eaten for dinner!