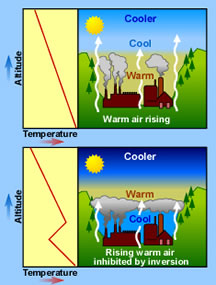 Air pollution doesn't always stay where it was made. In a very short time, it can make its way around the globe. This is called transport and dispersion and is very complex. There are many things that influence the way pollution is spread, including wind and atmospheric stability, as well the local terrain.

Wind is caused by differences in pressure in the atmosphere. The pressure is the weight of the air at a given point. The height and temperature of a column of air determines the atmospheric weight. Since cool air weighs more than warm air, a high pressure mass of air is made of heavy cool air. A low pressure mass of air is made of warmer, lighter air. Air moves from areas of high pressure to areas of low pressure, but the Coriolis Effect will cause it to move to the right in the northern hemisphere, and to the left in the southern hemisphere. Wind can dilute pollutants and rapidly disperses them, but it can also bring pollution to otherwise clean locations

Atmospheric stability refers to the vertical motion of the atmosphere. The air near the surface of the earth is usually warmer in the day because of it absorbs the sun's energy. The warmer lighter air at the surface rises and mixes with the cooler heavier air in the upper atmosphere. This is known as convection. This constant movement also results in dispersal of polluted air.

The dispersion of pollution is also affected by the amount of turbulence in the atmosphere. Other basic weather factors that affect concentration of air pollutants include solar radiation, precipitation, and humidity. Solar radiation contributes to the formation of ozone, making secondary pollutants in the air. Humidity and precipitation can also help create other dangerous secondary pollutants, like acid rain. Precipitation can also help by washing pollution from the air, removing particulate matter.

Large cities bordered by valleys or mountains often experience high levels of air pollution because of these natural barriers. Los Angeles, Denver, and Mexico City are examples of cities located in basins bordered by mountain ranges. These cities experience high air pollution because of the geography of their surrounding areas.

Did you know that ozone is found in two different layers of the atmosphere? You may have heard of the ozone hole problem - that is a lack of ozone in the stratosphere (the 2nd layer of the Earth's atomsphere)....more