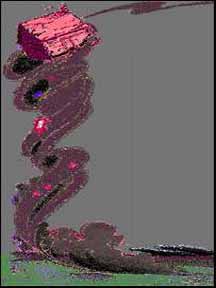 Tornadoes are very dangerous so it's important to know when they may form so you can take shelter. Forecastors at the National Weather Service are always looking for possible storms. Even though nobody knows for certain how tornadoes form, they do know when conditions are most likely for them to form. When the conditions are likely, the Storm Prediction Center issues a tornado watch. These watches usually last from four to six hours. When a tornado watch is issued, local storm spotter networks activate. If a spotter sees a storm, the local Weather Service office will issue a tornado warning for the local area near the tornado. They can also issue warnings based on radar images. Meteorologists us certain radar echos to help forecast tornadoes. If there is a warning issued for your area, you may hear about it from different sources. Most cities have tornado sirens to alert people to the danger. Also, using a new network called the Emergency Alert System, people can hear about warnings right away. Unlike the old system, the EAS will only notify you of warnings in your county and it is able to electronically turn on your radio or television when there is an emergency.

Meteorologists use radar to forecast where tornadoes might form. But, the radar can't detect actual tornadoes. People are needed to do that. The National Weather Service can't rely on tornado reports from...more

Most of the world's tornadoes happen in the United States. The area where most of them occur is know as Tornado Alley. There are about 750 tornadoes each year in the U.S. and about 100 people each year...more

The best way to protect you and your family from being injured or killed from a tornado comes from being prepared and knowing what to do. Families can prepare for a storm before it arrives. The first step...more