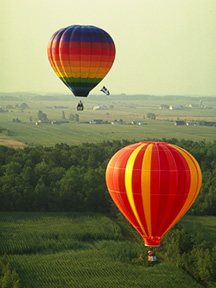 Hot-air balloons float because the air inside the balloon is less dense than the outside air.
Click on image for full size
Windows to the Universe original image

A tornado is the most intense force in nature. That doesn't mean it's the most powerful. In fact, a thunderstorm can be 40,000 times more powerful than a tornado. Then why aren't thunderstorms as dangerous as tornadoes? The answer lies in each storm's energy density. A tornado may not have nearly as much energy as a thunderstorm, but the energy in the tornado is concentrated into a much smaller area. Imagine you have a hose and are watering a yard. You can spray five gallons of water over the whole yard and not really notice it. If you were to spray a couple gallons in one small section, you would probably flood and possibly start to erode it. That's because the water was very concentrated, like the energy in a tornado.