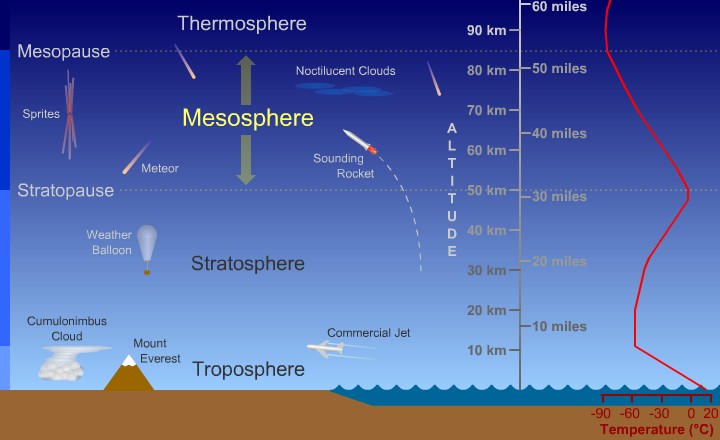 This picture shows some of the features of the mesosphere. Earth's mesosphere extends from about 50 to 85 km (31 to 53 miles) above our planet. The stratosphere is the atmospheric layer below it, while the thermosphere is above. The upper boundary of the mesosphere is the mesopause, while its lower boundary is the stratopause. Most meteors vaporize in this layer, a type of lightning called sprites sometimes appears in the mesosphere above thunderstorms, and ultra-high noctilucent clouds sometimes form in the mesosphere near Earth's poles. Sounding rockets are used to measure this layer directly, since balloons cannot fly high enough nor satellites orbit low enough to sample the mesosphere. The coldest temperatures in the atmosphere, about -90° C (-130° F), are found near the top of this layer. Temperatures decrease with height throughout the mesosphere.
Original artwork by Windows to the Universe staff (Randy Russell).