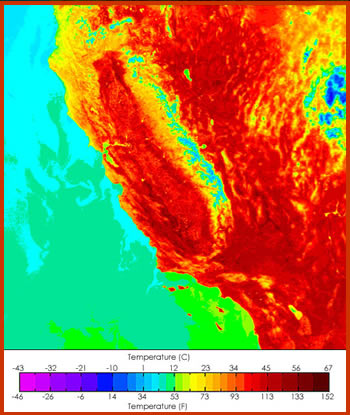 During a heat wave its hot outside  much hotter than normal  and the heat lasts for days.

Beware! Heat waves are dangerous. The hot weather can be hazardous to your health. It can cause heat stroke, heat exhaustion, and heat cramps. Stay inside or in the shade during a heat wave and drink lots of water to avoid getting sick. Heat waves are also dangerous to plants. They cause crops to fail and can help start wildfires in dry areas.

How do they form? Sometimes, the jet stream, a flow of air through the mid-latitudes, can bring unusually warm air into an area. If the warm air stays put for a while, it can cause a heat wave. The heat is able to persist when there aren't rain and clouds to cool things off. The heat-trapping ability of cities, known as the urban heat island effect, can make a heat wave even warmer.

There are more heat waves today that there were in the past. The number of heat waves has risen, especially in Europe and Asia, and heat waves are expected to become more common during the this century.

It often feels a bit warmer in a city than it does in a nearby rural area. This is called the urban heat island effect. What makes cities warmer?  Urban heat islands form because the buildings, roads,...more