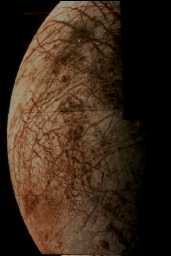 Europa, fourth largest satellite of Jupiter, has recently gained ground in expectations that it may provide an environment in which life might survive. As we have seen, life can exist on Earth in the most extreme environments; at great ocean depths, beyond the penetration of sunlight, thriving on upwelling chemical nutrients from the interior of the planet, or inside volcanic vents thriving on dissolved sugars. If liquid water were to exist on Europa underneath the ice, it would mean the presence of oxygen and solar photons, in a temperate realm. Thus it would not be unreasonable to expect life there.

The Galileo spacecraft has sent back to Earth detailed images of the surface of Europa. Many scientists believe the pictures reveal a relatively young surface of ice, possibly only about 1 km (~3250 feet) thick in places. Internal heating of Europa due to Jupiter's tidal pull could melt the underside of the icepack, forming an ocean of liquid water underneath the surface. But such an ocean has yet to be proved beyond the shadow of doubt.

As part of NASA's exploration of the solar system, preliminary development has begun on a mission to send a spacecraft to Europa to measure the thickness of the surface ice and to detect an underlying liquid ocean, if it exists. This mission would be a precursor mission, the one which sets the stage for the sending of "hydrobots" or remote controlled submarines that could melt through the ice and explore this possible undersea realm.

To read more about Europa, you may leave the tour and read our section on the recent findings about this moon, or take the Exploratour on the question Does Europa have an Ocean? This is page 12 of 20