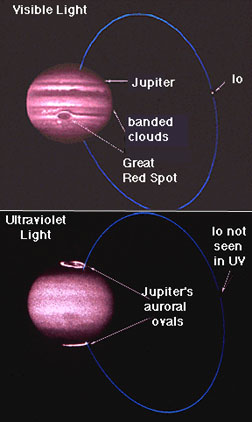 Jupiter has quite a different appearance in ultraviolet light. If you look very carefully, you will see that the bands of clouds are no longer clearly defined and the Great Red Spot has almost disappeared. In fact, the moon Io has totally vanished. You cannot see Io in ultraviolet light.

But the most spectacular difference is the appearance of a crown of light around Jupiter's north pole. Jupiter has an aurora. If you just finished looking at the view of the Earth's aurora, you cannot help but notice the similarity between the crown of light on Earth and the one on Jupiter. On Jupiter, the aurora glows mostly in ultraviolet light. Because of this, you cannot see Jupiter's aurora from the surface of the Earth. The Earth's atmosphere absorbes light at these frequencies.