ExploraTour - How to Build a Star 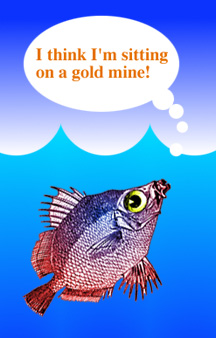 Stars generate power through nuclear fusion. Fusion is the joining together of light nuclei to form a heavier nucleus. The heavier nucleus has less mass than the combined mass of the lighter nuclei. The missing mass is converted into energy. In the sun, hydrogen nuclei are being fused together to form helium.

Hydrogen is commonly found on Earth in water. Water is a molecule made up of 2 hydrogen and 1 oxygen atoms. Within water, a small percentage of the hydrogen exists as deuterium which is a heavy form of hydrogen. The deuterium nucleus contains a proton and a neutron; while the nucleus in a hydrogen atom contains only a proton. This heavy form of hydrogen can be used as fuel in fusion reactors. If we can find a way to make fusion power plants work, we will have a virtually limitless supply of power using the deuterium in seawater as fuel.

If all of the mass in a 20-gallon fish tank were converted into energy (not just the deuterium), it could supply the energy needs of the entire U.S. for nearly a month!

So far we have been unable to find a container that will hold the hot dense mixture of ions and electrons that is needed to force fusion to occur. This is not likely to be solved anytime soon.

So how is the sun able to do it so easily?