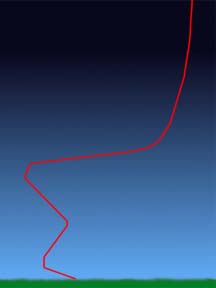 There are five layers in the atmosphere. The atmosphere thins out until it reaches space.

1) The troposphere is where weather occurs. You breathe the air in the troposphere.
2) Many airplanes fly in the stratosphere because it is very stable. Also, the ozone layer is there.
3) Many rock fragments from space burn up in the mesosphere.
4) The thermosphere is very thin. It's where the space shuttle orbits.
5) The upper limit of our atmosphere is the exosphere.

The thermosphere is the fourth layer of the Earth's atmosphere. It is found above the mesosphere. The air is really thin that high up. The temperature changes with the solar activity. If the sun is active,...more

The last layer of the Earth's atmosphere is the exosphere. This is the area where atoms escape into space....more